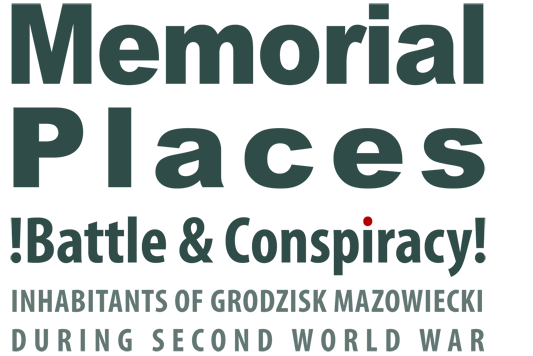 Information boards with short historical notes and links to a website created as part of the project will be placed near the places connected with the ‘Places of Remembrance’ theme. The extendedm information about the educational trail together with an interactive virtual journey through the town are also available on the internet in polish and english version. We hope that creation of the educational trail will help to commemorate the great contribution, fight and martyrdom of the local anti-Nazi and anti-Soviet resistance movement members and also to honour the important events from the Nazi occupation and Soviet regime times which is important to develop and maintain historical awarness and the identity of the local community members.

„Gąbka” – „Osa” group of the „Bażant” district of the Home Army (formed in 1942 from the Union for Armed Combat) was established on 17th February 1940. „Gąbka” – „Osa” group played a significant role in the history of the underground resistance movement during the World War II, fighting for freedom with the occupation tyranny.

Operational activities of the „Gąbka” – „Osa” group involved training and operations, intelligence and counterintelligence, logistics, information, desinformation and sabotage, radio and communication, airdrops support and logistics, liquidation section operations, health matters, scouting organisations and other areas. There were nearly 700 members of the underground grouppings living in Grodzisk Maz. and nearby villages as well as over 100 people participating in the conspiracy operations beyond the Group structures. It remains unknown how many more adults, youth and children supported the Polish Underground State during the Word War II.

Currently, the remembrance about the great contribtion of the Home Army soldiers in fighting against the occupation is maintained by the Światowy Związek Żołnierzy Armii Krajowej World Association of Home Army Soldiers of the „Gąbka” – „Osa” group of the „Bażant” district Obwodu „Bażant” Ośrodka „Gąbka”- „Osa” which brings together members of the underground organisations from the Grodzisk Maz. area.